I probably don't have this quite right (someone can straighten me out), but I understand that one of the questions that Lou Holtz (former coack of Notre Dame) would ask people who would be part of his team or staff is: "Are you only interested in what I can do for you, or are you interested in being concerned about me as a person?"

I think this is a reality for check in everything that we are doing.  Are we interested in developing our program, or our house church, or our ministry, or our agenda?  Or have we genuinely developed a concern for people?  Just people!

I have discovered that motivation is everything!  If my concern is not genuinely about the welfare and interests of individual people, then I am already headed down the road of control or manipulation.  I will use people for my interests rather than be availabe for whatever is of most value to them.

The church, of course, is traditionally guilty of asserting the corporate vision and then assuming that what is in the best interest of each person is to help fulfill that corporate vision.  In the process, we miss the individual beauty and uniqueness of each of God's children.  We marginalize those who do not quite fit the "mold" of what "our church" values or esteems.

However, lest we throw stones, I do not want to assert the new "house church vision" and miss the point.  It's not about starting house churches, developing a network of churches, or planting yet more house churches.  It's about people.  A person, whoever he or she is, that I am called to minister to.  Whatever is best for that person's calling and community life is what God is into.  Not my agenda but His agenda in and through that person.

Church communities do develop in order to support people in what God is doing in and through them.  These communities and gatherings are important and necessary.  But our motivation in our approach to these communities is everything.  Are we building communities, churches, or house churches?  Or are we laying down our life to build people.  Maybe just one person.  Because that one person matters!

The "prevenience model" for church is illustrated in the Old Testament.

The cloud = the physical manifestation of the presence of God (see Mt. 17:5)

The people of God are always the responders. Their job description is simple: "WATCH THE CLOUD. If it moves, then you move. If it doesn't move, then you don't move.  No matter how long it takes - two days, a month or a year."  For some of us, learning how not to move is much harder than learning how to move.

Sounds un-American, doesn't it? Our culture says, "Be proactive! Don't just sit there - do something! Make it happen!" And that culture is reflected in the church.

The values of the Bible are different. "WATCH THE CLOUD. Do what it does." God is God and we are not. It's His church, not ours (Mt. 16:18). He is building it and we are not (although He does let us help out some times).

The church that God is restoring is more than a church that meets in the home. Its a church made up of people who are getting really good at WATCHING THE CLOUD. And responding appropriately.

Church in a Pub; Church on Campus

In an earlier post (over a year ago) I mentioned a simple church that met in a pub.  Recently I received this comment:

You might be interested in Christ Church Brighton, we have a meeting in a pub every Sunday evening.

Additionally, if you receive the Friday Fax (weekly from Wolfgang Simson-click here if you would like to subscribe), then you saw his article about simple churches being planted on college campuses and an evangelistic event that took place on the campus of UCLA:

This past Wednesday at UCLA we experienced a taste of heaven on earth, but it came with a cost. As we walked up onto campus there were thousands of students walking up and down Bruin Walk. Normally, we would sit at the patch of grass where there were not many onlookers (free speech area), but on Wednesday the main steps at the top of Bruin Walk were open - we took it by faith. As we sat on the steps we began to pray...

Has not God made the wisdom of this world foolishness, and doesn't he use apparently foolish things to confound the wise? So we stood there worshipping God, not so that the students would hear us, but so that God would hear us. It was difficult. We were distracted by all sorts of thoughts, and one of us felt sick. Despite that, we sang for two hours, until we sensed that the time had come to preach...

My voice threatened to fail me, but I sensed that God was there. More and more students stopped to listen - a group here, a group of Asian students there, another group of African American students who had been listening to music from their boom boxes only moments before. They all listened as I preached the Gospel; at least 120 students, for almost half an hour...

Read the full story here as well as other stories taking place on college campuses.  You might also take a look at the rest of Jaeson Ma's website which is chock full of simple church principles along with an apostolic vision to reach his generation (13-30 year-olds) and plant churches throughout college campuses! 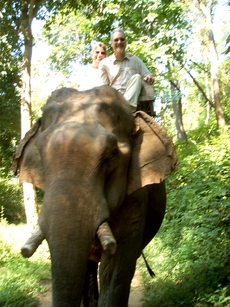 Thailand just had their first ever House Church (slash) Church Planting Movement Conference.  It was wonderful to be able to have a part in this conference that, at least for some of the Thai leaders, provided a breath of fresh air and hope for their country.

It is fascinating (and worrisome) to see a country, relatively new to Christianity, that is bogged down with a traditional model of church-life that is neither relevant to their culture nor effectively reaching people for Christ.  Out of a nation of 60 million people there are only 300,000 Christians.  Yet, to start a new church requires (naturally) a building, sound system, instruments, and a seminary-trained pastor.  This concept of church is so well engrained that most Thai leaders were not interested in a conference that presents a different church model.

Nevertheless, over 100 did attend and it was clearly the beginning of doors opening to new paradigms!

Highlights of the conference:

Brad Beaman shared from the research and experiences of the IMB's Church Planting Movement research.  David Garrison's book on this subject is an excellent read.  They are suggesting a basic paradigm shift for mission that has come out of studying rapid church planting movements in various countries.

The old paradigm for mission:

The new paradigm shift is the same for the first three points:

There are rapid church planting movements taking place (i.e. India, Nepal) in which this is exactly what is happening.  By the very nature of the process, most of the churches started are simple, participatory, easily-reproducible house churches.

Thailand is at a crossroads that is not unlike much of the western Christian world...  I pray that they will be able to break out of the box and give birth to new church expressions that are simple, indiginous, Spirit-directed and that facilitate a movement of Jesus' presence in their nation.

Other highlights from the trip: