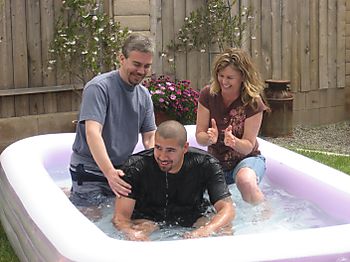 When we baptize new believers we have taken Neil Cole’s advice which is, “baptize people as soon as possible and as publicly as possible.”  In short, we throw a party.  Not for the already-churched, but for the families and friends of the person being baptized.  In fact, when we have baptized people recently we have many more guests present than people that we already know.

Our last baptism was a prime example, with a twist.  John is a twenty-something who has come out of a background of gangs, prison, and drugs.  He wanted to be baptized.  We told him our standard line: “Great!  Let’s throw a party and invite all of your friends and family to come.  You can share what God has done in your life and we will have a bbq, baptize you, and enjoy the company.”

“Okay,” he said accepting that this must be the way it’s done.  “There is only one problem though.”

“If there is no beer, then I am not sure any of my family and friends will come.”

So he did.  And his family and friends came.  Perhaps 20 or 30 of them.  Nobody got drunk or out of control.  It was a “baptism” after all.  Everyone had a great time.  John shared his story of how God had worked in his life and many new relationships were built with those who came.

While this may unsettle some who read this, if you think it through you may just realize that baptism was, indeed, meant to be a public affair and not something that Christians do behind closed doors.  Furthermore, if the public is invited to participate, then the public can be expected to do… well… whatever the public does.

For me, personally, it was by far one of the best baptisms I have ever attended!

(By the way, his mother-in-law and father-in-law baptized him who are also, currently, his spiritual parents).

My wife and I have not missed a House2House conference since the first one we attended five years ago.  We have always found the camaraderie, sharing of stories, and encouragement to be invaluable.

I, honestly, do not know how we would have weathered our transition from traditional-type church to a more organic one without the connections and input we have received from H2H and these conferences.

This year it is in Dallas over Labor Day Weekend.

You can get all of the information here.