Since simple church is incarnational in nature (taking the Gospel of the Kingdom to the world rather than inviting the world to come join our Christian activities) and since people in need are often the ones most receptive to the Gospel, we should not be surprised when we find ourselves, at times, serving people in varying degrees of physical need and poverty.

The question is: are we prepared for this?

To help us with this issue, I want to mention an excellent primer in empowering people in need: “When Helping Hurts: How to Alleviate Poverty Without Hurting the Poor . . . and Yourself” by Fikkert and Corbett.

The authors share many of their own experiences and those of others that helped them realize that “when North American Christians do attempt to alleviate poverty, the methods used often do considerable harm to both the materially poor and the materially non-poor. Our concern is not just that these methods are wasting human, spiritual, financial, and organizational resources but that these methods are actually exacerbating the very problems they are trying to solve.”

Using excellent Scriptural background Fikkert demonstrates that the goal of kingdom work is “to restore people to a full expression of humanness, to being what God created us all to be, people who glorify God by living in right relationship with God, with self, with others, and with the rest of creation.”

With this in mind the book outlines some key principles for serving the poor:

1. Know the difference between relief, rehabilitation, and development.  Know which one is needed in the given situation and apply it.  Providing ongoing relief (meeting critical needs in a time of crisis), for example, when community development (empowering people to help themselves) is called for will simply exacerbate the problems and helplessness of those we want to help.

2. Beware the poison of paternalism and “do not do things that people can do for themselves.”

“ABCD is consistent with the perspective that God has blessed every individual and community with a host of gifts, including such diverse things as land, social networks, knowledge, animals, savings, intelligence, schools, creativity, production equipment, etc. ABCD puts the emphasis on what materially poor people already have and asks them to consider from the outset, “What is right with you? What gifts has God given you that you can use to improve your life and that of your neighbors? How can the individuals and organizations in your community work together to improve your community?”

“In contrast, needs-based development focuses on what is lacking in the life of a community or a person. The assumption in this approach is that the solutions to poverty are dependent upon outside human and financial resources. Churches and ministries using a needs-based approach are often quick to provide food, clothes, shelter, and money to meet the perceived, immediate needs of low-income people, who are often viewed as “clients” or “beneficiaries” of the program. Pouring in outside resources is not sustainable and only exacerbates the feelings of helplessness and inferiority that limits low-income people from being better stewards of their God-given talents and resources.”

4. Use a participatory process that engages and energizes as much of the community as possible.

You can check out the book here or their website here.

An Army of Ordinary People 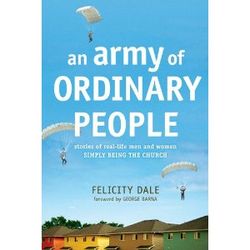 Tony and Felicity Dale have been used wonderfully for many years as a catalyst in the simple/house church movement.  Felicity provides us with background on her newly re-published book, "An Army of Ordinary People," in the following interview:

Question:  What is the main message that An Army of Ordinary People seeks to communicate?

Felicity:  All around the world, God is giving His people a vision of church that is simpler—a group of friends gathered around a meal table, a vibrant community of Jesus followers reaching out to the world around them.  These groups are known as simple, organic or house churches and in many nations, movements of these churches are seeing explosive growth because of new believers.  This book explores the main principles involved in these movements using examples from here in the West.

Question:  An Army of Ordinary People is essentially a book of stories.  Why did you choose this way to communicate?

Felicity: Stories are powerful.  Jesus used them all the time to communicate truths to his followers.  There’s a saying: “The longest journey a man must take is the eighteen inches from his head to his heart.”  A person may be convinced intellectually, but that doesn’t necessarily translate into action.  The reverse journey from the heart to the head is way shorter.  If you can capture a person’s heart, their belief system catches up very quickly.  Stories tug at our hearts and are more likely to produce change.
A generation is rising up for whom stories are a vital way to communicate.  They often read little, and for them, books are only associated with academic learning. If you ask them what they remember from a talk, they are more likely to remember the illustrations than the theory.  I know people who would never read a theoretical book on church planting, but have read Army in a few short days.
The principle that each story illustrates is explored more fully at the end of each chapter.

Question:  What other important principles come out in the book?

Felicity:  I describe the story of two men who started a prayer movement—any move of God has to be bathed in prayer; I look at Sam, who most people would have written off, but who reaches out to the marginalized of society.  I explore the transition process using the journey of a traditional church pastor who discovers simple church.  The story of Elizabeth shows the importance of reaching out into the community rather than asking others to come to our church.  Other chapters look at what you do when you come together, and how to meet under the guidance of the Holy Spirit.

Question:  Tell me about the process of writing the book?

Felicity:  My husband, Tony, and I have been involved in simple/organic churches in this country since the mid 1990s, and before that in similar groups in the U.K.  In 2000, two couples approached us and asked if we would consider helping them start a magazine for the house church movement.  We agreed, and House2House (www.house2house.com) was born.  People frequently contacted H2H with questions, and rather than trying to answer each person individually, I decided to produce a written work exploring the principles of simple/organic church.  This developed into a manual that has been used all over the world.
The stories in An Army of Ordinary People embody the principles in the manual.  Once I had decided whose stories to use, I spent a long time, often several hours, interviewing each person.  I transcribed each interview and then wrote the story.
So the book is really a “how-to” guide on discipleship and simple/organic churches but using stories as the primary means to communicate this, followed by an exploration of the principles involved.  Most of the stories are about ordinary people, not spiritual superstars, whom God has used, often in remarkable ways.  The hope is that anyone reading the book would be able to identify with one of the stories and say, “I could do that!”

Question:  This is the second version of the book to come out.  How did the Lord use the original version?

Felicity:  Tony and I self published the first version.  (We did have an offer from a major publisher who offered us “fame and fortune” for the original manuscript, but that seemed so contrary to the principles of simple/organic church that we turned them down!)  I am very grateful that this updated version is being published by Tyndale House Publishers within the Barna imprint.  Tyndale has been a pleasure to work with, and of course, George (Barna) adds huge credibility.  I deeply appreciate his integrity and input.
I am always humbled when I hear of how God uses anything I’ve written. I’ve heard of mega churches, simple/organic churches and, of course, individuals who used the older version of Army to think through the principles of simple/organic church and learn how to work more effectively with communities of not-yet-believers.  Other churches have used it to revitalize their small groups and make them more missional.  Army was written for ordinary people (rather than theologians or trained professionals) who want to follow the Lord into the harvest.

Question:  When you went back to everyone to update the book five years after originally writing their stories, what did you find?

Felicity:  To be honest, I approached this with some trepidation.  Would it invalidate what I had written if everything I described in the original book had imploded?  But I found that all but one or two of the people whose stories I told were still pressing on with the simple church journey.  God is continuing to use them.  Where relevant, I’ve included updates on their stories in the new version.

Question:  How typical are the stories you have written?

Felicity:  I could take you to literally dozens of stories that illustrate each of the principles I describe in Army.   Our other book, The Rabbit and the Elephant has a number of these stories in it.

Question:  You originally wrote this book in 2005.  What has happened to the house church movement in the United States since then?

Felicity:  Amazing growth!  According to research done by George Barna (who has written the foreword to the new book), there are now around 11 million people in this country involved in simple/house churches.   Obviously many of these people originally went to a more traditional form of church (what we like to call a legacy church), but one of the most encouraging things we are currently seeing is the number of these churches that are multiplying through new believers.

Question:  What do you see for the future?

Felicity:  Jesus is building His church, a beautiful bride.  Organic/house church is part of the journey, but we are kidding ourselves if we think this is the only thing God is doing.  I also see other important issues developing momentum within the movement—for example, an emphasis on the Kingdom of God, another on the role of women within the Kingdom.  But what a privilege to be involved in the Kingdom at such a time as this!  We’re no longer sitting wistfully on the sidelines watching God move elsewhere in the world.  He’s working here too!  And house/simple church is one of the things He is doing.