Are You Writing or Blogging on Christmas? 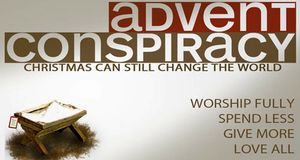 Loving the Voice of Jesus -- the Irreligious Way of Life

The irreligious love the voice of Jesus.  And they love following His voice wherever He leads.  And as the world becomes filled with this type of follower, the most explosive things will happen.

I find that religious people (I know from experience) love the voice of routine, and church events, and predictable services, and knowing what’s coming next.  We often love Jesus but, really, we love even more our comfortable religious boxes, our titles, our roles, and our programs that others appreciate us for.

Not Virginia.  This friend of mine loves the voice of Jesus and knew that He was nudging her toward India.  One of her sons had moved there but this was way outside of the box.  She knew no one where she was going and she was not being sent by any organization or church.  She had no backing, no plan B, and no clear idea of what she would be doing there.  She simply believed that Jesus had spoken and she went.

For 11 months she wondered what she was doing in this strange land surrounded by needs that seemed overwhelming.  She served where she could, but mostly she got sick and recovered only to get sick again.  She prayed and begged God to show her more, but there was little direction and it seemed that her life was making no sense.  Finally, her trust began to crumble and she huddled on her knees on the floor of her small apartment crying out to God.  She said, “I was set to stay in prayer until I heard from Him no matter how long it would take.”

Virginia went on, “I wasn’t on my knees but a few moments when I heard His still small voice say to me,

The only mountains Virginia knew about were the Nilgiri Hills nearby where there was a Christian school.  She had never been there, but knew the school cared for the children of missionaries as well as Indian students.  To make a long story short, the school had been praying fervently for an Art/Bible teacher because of a recent vacancy.  And, yes, that is exactly what Virginia has a background in.  As this unfolded, she said, “I find I love teaching.  Love the kids, the challenge, the stimulation and being part of this dedicated and serving, God-centered community.”

One can only imagine the impact Virginia is now having in India (not to mention future generations) because she was living outside of religious boxes but married to listening and following the ever-creative, world-impacting Jesus.