Note: This is a continuation of chapter two of my Irrelgious Follower book which I am writing here as posts in order to incorporate your comments and thoughts.  The first parts of this chapter are found here and here. 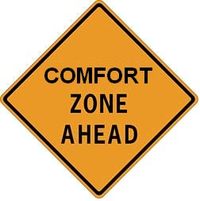 Are Rules & Comfort Zones Robbing Us of the Adventure?

I confess it openly.  I often just want someone to spell out what the rules are around here.  For example, I adore my wife.  But sometimes I long to reduce our relationship to a set of fixed routines and actions: “Just tell me what the rules are so that I can keep the peace and keep you happy,” is part of what my lazy inner-self is saying.  But, it’s a relationship.  Those things that cause us to connect at a deeper level today, will not provide the exact same result tomorrow.

Arrggg!  The unpredictability, and thus the adventure, of relationships.

Yet it is this very movement and fluidity within real relationships that make them so dynamic, alive, real, heart-filling or heart-crying, fulfilling and/or frustrating all at the same time.  Let’s get real here.  Who would exchange a relationship with a person for a robot?

Yet how often we do that very thing with God.  Part of us wants Him to be a mechanical dispensing machine, a vendor in heaven, One who hands out predictable answers in response to our specific actions or prayers.  “If I do this, I expect God to do that.”

This is precisely the problem religious people had with Jesus.  He did not fit the predictable box they wanted to keep God in.  Since God established the Sabbath as ‘law’ there is no way that this same God would tell His disciples to harvest grain to eat or heal a sick man on a Sabbath day.  No way.  It could not happen!  But it did.

I believe that God Himself is initiating a new breakout from the mores and traditions of religion today.  It’s time.  The church has become passive, sleepy, and bland while sustaining itself by keeping up the predictable routines and rules that define their Christian righteousness.

More importantly, Jesus surely longs to express Himself in new, fresh, and powerful ways as His followers are willing to actively engage in relationship with Him regardless of the cost.

A friend of mine recently showed me a book on rock climbing where he was listed as one of the first adventurers who climbed a particular difficult route on a particular mountain. “Wow,” I said.  “I had no idea that you were such an avid and accomplished rock climber.”

“Well actually,” he replied, “I haven’t climbed now for almost thirty-five years.  When I married my wife I felt that it was not right for me to continue to risk my life in that way.”

I appreciated this and I’m sure his wife did as well.  In fact, it was probably very prudent.

But in the spiritual realm, do we give up the very adventure Jesus called us to with excuses that are not prudent, but lazy and comfort-driven?

Note: This is a continution of chapter two of my Irreligious Followers book.  The first part of this chapter is found here.

My favorite story from when I preached endless sermons to endless groups of listeners (poor things) was this one:

A little boy visiting his grandparents on their farm was given a slingshot to play with in the woods. He would aim at berries, and shoot them down. He tried aiming at the wood pigeons. However, they were too quick for him. He spent a whole morning in the woods, mastering his new-found skill.

On his way back to the cottage for lunch, he saw grandma's pet duck. On impulse, he shot it in its head and killed it. In panic, he hid the dead duck in a pile of wwood,but his sister was watching. Susan saw everything, but said nothing.

After lunch that day, grandma said, "Susan, let's wash the dishes." Susan replied, "Grandma, Jack told me he wanted to help in the kitchen. Didn't you Jack?" Then she whispered into Jack's ear, "Remember the duck?" So, Jack helped with the dishes.

Later that afternoon, Grandpa asked if the children wanted to go fishing."Oh, no. Susan has to stay back to help me clean the cottage, “Grandma intervened. "It's all right, grandma. Jack will stay to help you. I can accompany grandpa," Susan was fast to retort, and again she whispered into Jack's ear, "Remember the duck?" So Jack stayed behind to clean the cottage.

These 'remember the duck' went on for many days, until Jack could not take it any longer. Susan was always threatening, and Jack out of guilt, succumbed to her threats. He finally took courage and went to Grandma to confess to her that he had killed her pet duck.

Grandma patted Jack on the head, gave him a hug and said, "My dear boy, I know. You see, I was by the window the other day and saw the whole thing. Because I love you, I forgave you. I just wanted to see how long you would let Susan make a slave out of you.”

When we allow the voices of our past, of our mistakes, and of our own shame make a slave of us, we fail to fully embrace the power and wonder of the cross of Jesus Christ and walk in the freedom that has been purchased for us.

When we place ourselves under the dominion of institutions or religious human leadership, it is so easy to retreat back into those familiar places of guilt/shame and allow others to control us even if it’s unintended.

‘Freer still,’ is the watchword of today’s awakening, irreligious followers.  It must begin with our own heart’s freedom to walk in innocence before God and man.  There is no other foundation to follow Jesus other than one He has provided: ‘no condemnation.’

But, this freedom, starting from there, goes so much further:

God is unleashing a freed-up Body—free to love and serve only Him with abandon and passion.  Let’s break this down and see if we can throw off all the religious ‘ligatures’ that try to keep us from the full freedom we are called to.