Appointed as Senior Pastor: the Best Thing that Ever Happened to Me

Yes, I wrote the title, in part, to get your attention.  But there is an aspect of truth to this statement that I want to draw out.

My contention is not that we need fewer leaders, rather it is that we need every member of the Body of Christ to step fully into his/her ‘priesthood’ of influence.  One of the benefits that occurred when I accepted the role of ‘senior pastor’ is that I was expected to fully engage in ministry.  The result was that I challenged myself to overcome my insecurities, doubts, and other lack of faith in order to step fully into my place as a functional minister.  I was forced to see myself, as God sees all of us, as one called to “show forth the goodness of God” by exercising spiritual gifts that are “given to all” in order to “do the work of ministry.”

Now, granted, I believe that assigning someone the role of ‘pastor’ within an institutional system creates many problems including demoting everyone else within that system to ‘lay person.’

But, that is an aside to the point I am making.

Because I was given this position, I pushed past my insecurities and doubts about who I was and whether or not I was capable and gifted and was forced to accept that I was called to step into ministry functions.  So, I just did it.

My concern is that too many times we do NOT push past our insecurities and doubts about who we are in order to step into our role as a minister, a shepherd, an apostle, a teacher, a helper, an evangelist, an encourager, or a prophet.  The result is that the world does not see Christ as He is meant to be seen—through every member of His Body fully functioning with confidence in all that we have been called to do.

Therefore… the body of Christ does not shine in a world that needs His life because too many of His ambassadors are simply too insecure.

It’s simply not enough to get rid of the priest/laity divide.  Rather, we must internalize, each of us, that we are ‘royal priests’ and expect to function in all that this implies.  He has gifted and called… you.  This is a key ingredient for unleashing the church out of the four walls and into its organic, viral nature that will ultimately transform every segment of our world.

Disciple Making is the Core

The simplest view of the living church life cycle is this:

At the heart of this process is the imperative to make disciples.  Alan Hirsch does a great job of describing one aspect of why this is so important. 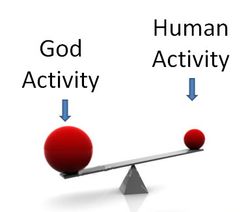 I am hosting a one-time webinar/conversation on Engaging More of the Supernatural in Life & Ministry.  Of course, all of life and ministry is supernatural as we partner with God, but our thinking and actions often keep us from experiencing the full weight of God's activity because of our innate reliance on ourselves.

The video in the previous post (52 churches in 5 years) is part of the inspiration for this webinar.  In addition, we will look at some of the key principles of supernatural engagement and share stories with one another on these: