We love the stories of God speaking in dramatic ways leading to amazing things. I think of Loren Cunningham, years ago, seeing a vision of a map of the world with waves breaking over it. He sensed that the waves were young people covering the earth with the Gospel. This vision inspired him to launch out in what would become the worldwide Youth With a Mission (YWAM) movement.

BUT, is this the normal or usual way that God speaks to his people?

Dallas Willard, in Hearing God, argues that it is not. Further, if we think of God as primarily speaking in such dramatic ways, we may end up missing much or most of what He is saying to us.

Unfortunately, this gentle low-key word may easily be overlooked or disregarded, and it has even been discounted or despised by some who think that only the more explosive communications can be authentic. For those who follow this view, a life of hearing God must become a life filled with constant fireworks from heaven…

God usually addresses individually those who walk with him in a mature, personal relationship using this inner voice, showing forth the reality of the kingdom of God as they go…

But a major point of this book is that the still, small voice—or the interior or inner voice, as it is also called—is the preferred and most valuable form of individual communication for God’s purposes.

No doubt, those who know Loren Cunningham would say that his ability to walk out God’s plan for him and YWAM has been primarily a result of his dependency on daily hearing and following the voice of God. He cultivated a daily, hearing ear. I can assume this because it is a core teaching in all YWAM schools today.

Similarly, for the church to be an organic movement of life, it requires the participation of all followers in the amazing journey of hearing and responding to God in quiet yet powerful ways. This is not dependent on having a dramatic vision or encounter, but it does involve learning to attune ourselves to the daily voice of God. 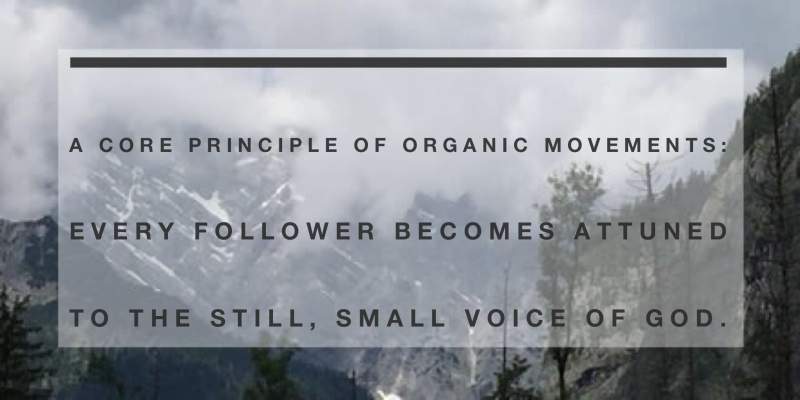 A core principle of organic life and movements: Every follower becomes attuned to the voice of God—especially His still, small voice.

Today there is a desperate need for large numbers of people throughout various arenas of life to be competent and confident in their practice of life in Christ and in hearing his voice. Such people would have the effect of concretely redefining Christian spirituality for our times. They would show us an individual and corporate human existence lived freely and intelligently from a hand-in-hand, conversational walk with God. That is the biblical ideal for human life.

The church can re-discover its natural power as a movement when every follower becomes accustomed to encounters with God’s word and voice. We are, after all, making disciples of Jesus (sheep who know His voice) not disciples of ourselves or a church leader.

Now, don’t get me wrong. May God give dramatic visions. But, even more important, may many, many more of God’s people simply walk out in intimacy the daily directives of God that will lead to fruitful, organic, Kingdom lifestyles in a world needing His life and light. 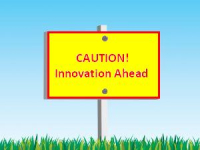 Church expressions must change to reflect God and his kingdom well both in the west and around the world. Indeed, we are seeing innovations but change is still slow and not, necessarily, keeping pace with where they could be.

Every day I see new formulas for how to live as missional communities, or missional families, or organic followers, or disciplemaking communities. This is all GOOD. It means we are finding relevant ways to walk the lifestyle of following Jesus and then developing new structures (church expressions) to support those lifestyles.

In the world of cross-cultural missions, there is much talk of disciplemaking movements and church planting movements. In my experience, some of this is more talk than reality, but it is still GOOD in that the dynamic nature of the church is giving new impetus toward fresh expressions.

But… surely we have only just begun. Let’s not be too quick to brand our current formula as the ‘one-size-fits-all.’ Let’s continue to innovate what it means to live as salt and light in our world and context, and then develop the structure/expressions that best support that lifestyle and give it the impetus to reproduce.

Allow me to break this down a bit in order to encourage even more innovation of church expressions.

Church is first and foremost God’s people living a lifestyle with and for him. It is his people following him and doing life in ways that glorify him and display his kingdom. It is not a series of programs, events, or services.

The structure of ‘church’ (whatever that looks like) is always meant to support the lifestyle of those who are bringing Kingdom life to earth through an intimate walk with God and a missional lifestyle (broadly termed) alongside of others (spiritual community). But we have a tendency to rely on structures of church to define our lifestyle rather than the other way around. We easily become structure-dependent. 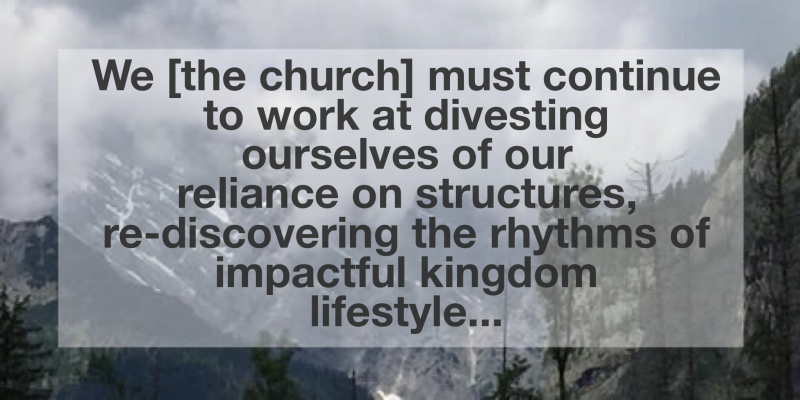 We must continue working at divesting ourselves of our reliance on structures, re-discover the rhythms of impactful Kingdom lifestyle in our context, and then develop the structures/expressions that fully support the impactful lifestyle allowing it to then reproduce in others. This is where innovations are coming from and this is where they must continue to come from.

We are called to follow Jesus. This is the natural God-ward rhythm. We need others to support us in this. This is the community rhythm (team, family, group, spiritual friends). We are also designed to be world changers by being involved as disciples who call others into followership (in many, many different ways). This is the missional, reproductive rhythm. With this as our starting point, we WILL continue to discover innovative structures (wineskins/expressions) that support the fresh and living wine of today.

Let us continue to look forward in this dynamic, transformative time!

Are we first and foremost called to mission or, rather, to create community out of which mission comes? Most would agree that it is not either/or. But I have seen (and written) much about the primacy of one verses the other.

For example, I have written about the nature of the church as ‘going.’ And many agree that the church is missional by nature just as God Himself is missional to the core.

On the other hand, church is always a community of believers and relationship is at the core of God’s dynamic personality.

Recently I was struck by this quote from JR Woodward: “When we live authentic and vulnerable lives, we cultivate communities that have a good theology of failure, people willing to take risks.”

This helped me to tie mission and community together in a fresh way. Mission and ‘going’ always involves the element of risk-taking as we step out of comfort zones and into the world, culture, and lives of others. So where do we develop the faith and find the support for doing this? Woodward argues that authentic community is part of this provision!

So, we see mission and community married together—communities on mission—with the reminder that we need each other in order to live the kind of adventurous, faith-exhibiting life of a mission-centered Jesus follower!

On a personal note, I do want to acknowledge so many of you who are part of my personal and virtual community. You do give me strength to take FAR more risks in mission and life than I would without you! Thank you!