Often the hero is someone other than ourselves. We are ordinary and heroes are extra-ordinary. We are everyday people while heroes are people with special gifts or positions of influence within our world and society.

Sometimes we seek to be the hero ourselves. 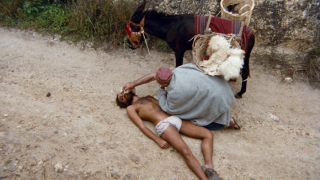 But we need to ask this important question. Who is really the hero in the story?

A person going about his business was robbed and beaten and left along the side of the road desperately needing medical care. The typical heroes walked by him. These were the people with titles and influence. They were revered as those with special gifts and positions. And they passed by the person in need of mercy.

The ordinary person, considered an outcast by many, walked by and saw the man on the side of the road with a need. He went out of his way to help the injured person and provide mercy. He took him to the hospital, cared for his needs, and even paid his medical bill.

Jesus tells this story in order to turn our human perceptions upside down. I wonder if we are listening. The hero is the everyday person, even the person considered less-than, who does an act of love for someone in need of mercy. No, this is not just a sappy story. This is a declaration of the way it is in the Kingdom of God. Those we humanly revere are not important, or highlighted, or lifted up in the economy of God’s Kingdom-- the eternal rule of God throughout eternity. No, the Kingdom of God is not built upon those who are naturally acclaimed by this world. Instead, God’s Kingdom is built upon the simple everyday acts of mercy that every follower of Jesus does by sowing the love of God into a lost and broken world. Simple, yet profound, acts of Kingdom love. And, these are the truly important actions that take place daily by everyday followers, who then are the true and real heroes of the story.

The only true hero in God’s story is the one who, today, sows an act of Kingdom love simply and in obedient love for God. Collectively, these acts become the mustard seeds that bring the Kingdom of God to earth in abundant fruitfulness declaring Jesus as King and establishing his reign forever. There is nothing more heroic or fundamentally significant in this world and in the world to come.

My practice of simple/organic/house church is simply an outcome of my longing to be amongst such heroes and to encourage such acts.

NOTE, you can register immediately as there are only 8 spaces remaining on a first come, first served basis!